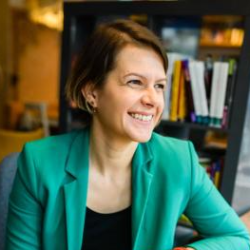 Have you ever wished you could produce amazing animations to dazzle your audience and enhance your content, be it newsletters, social media posts, articles or infographics - but don't have the experience to do so? We got your back.

Our mission at Animately is to give marketers the tools to quickly and easily produce GIFs that are beautiful, engaging and quick to load. Besides offering an intuitive app to help you shine, we went on a quest to talk to several experienced designers and get their tips and tricks for creating amazing GIFs.

We asked for their advice for creating animations, for the difference between a good GIF and a great one, for mistakes to avoid and for some inspiration to get you started.

Their answers are both practical and inspirational: from getting the specs right and asking the right questions, to understanding motion and finding your personal touch.

One tip that stood out was creating GIFs often and posting them for feedback. Do this for two reasons: get better with practice and increase awareness for your projects.

Without further ado, here’s what the pros had to say.

Angela Gigica: Ask for all the specs and technical details

In most cases, your GIF won't exist in isolation; it'll be part of a wider brand strategy and campaign, so there are always other things to consider (tone of voice, target audiences and so on), and there is no need for it to say it all.

You can think of it as one piece in a larger, carefully organized puzzle.

If the messaging is too convoluted, maybe a GIF is not the solution to the brief. Maybe it needs to be a 60-second video, or it needs to sit with some copy and support the copy in a different format such as an article or a newsletter etc.

One mistake I see (and I used to be guilty of when I started, too) is not asking for all the parameters from the very start of the project (i.e. size, aspect ratio, where the GIF/animation will be hosted, frame rate, length, brand guides etc.)

Sometimes clients give us vague briefs, and perhaps some great ideas are already discussed in the early stages. As designers, we get excited by an idea and want to get cracking with designing and creating.

My advice is: insist on finding out all the specs and technical details before even starting on an idea because custom animation is an expensive exercise. If these details are not available, flag it up with your producer and mention the cost implications for re-creating the piece from scratch in case there are any 'surprises' along the way or just before delivery.

This GIF was a part of a set of five GIFs that I was asked to animate to bring to life Google Play's consumer research-based article with tips on how to build an app which not only survives but thrives. The copy said 'Be intuitive and reliable'.

As I mentioned before, your GIF will rarely exist in isolation. In this case, it was part of an article (with stats and quite a bit of data). It worked because it served the product. The client had great feedback after releasing the piece. The brand is instantly recognisable, and it illustrates the main idea in a simple, fun way. It makes you want to read the article - job done!

>> Angela Gigica is an independent motion design specialist. Originally from Romania, where she completed her education in decorative arts and design, she spent the past decade living and working in London, UK, where she collaborates with various global brands.

One of the worst experiences with GIFs that we can still see even today is doing GIFs too large in size, which affects user loading time. Remember that not everyone in the world has a fast connection, and a significant percentage of people are on data-saving plans. So keep GIFs short, light in size, and don't go too extreme with the resolutions.

Another mistake is using an unlooped GIF. Try to avoid them.

This was a small promotion animation of a skateboard deck in a 2018 series. Although the campaign ended long ago, it still grabs the public's attention. Its motion forces you to look at it a couple of times, which allows you to get a good look at the product.

>> Maksym Zakharyak is a Ukrainian multidisciplinary designer with a deep focus on motion design, with 10+ years of work experience in advertising and design and 2 years of curating and teaching others.

One of the things I focus on to improve my animations is that they have good timing and are as smooth as possible.

At the same time, these are things that many beginner animators fail at.

Good timing is essential to keep the audience's attention: if the timing is too slow, it bores the viewer, but if it's too fast, it can leave them confused, and they won't understand what they just saw. It has to be just right. Combine that with smooth animations, and you'll capture anyone's attention.

These things take a lot of time and practice to get good at, but the results are always satisfying.

>> Domingo González is an experienced motion designer from Caracas, Venezuela. He has loved animations since he was a kid and strives to improve every day.

Make them really nice and thoughtful. They should show off your skills at maximum, so pick a couple of seconds with action and some beautiful mini-scene. It's even better if that's looped and can maintain limitless motion.

Great animations are natural, and the motion never stops. Even if there’s a character that stands still, it shouldn't be literally still. So the main thing is to make the motion fluid.

When you notice that the motion is unnatural, it is always visible, even for people who don't have their eyes sharpened with experience. They can't express what's wrong, but they see something is off. Pretty much like the uncanny valley. So that's the main thing.

And you need a lot of practice. Because one thing is to understand such things, but another is to learn what to do and how to manage it. It comes only with experience and daily practice.

Daily GIFs are a really good way to do it, and they will also allow you to gather feedback if you post it somewhere.

When talking about business, many GIFs are employed for user acquisition. I see many of them in meditation apps, for example, because they are "oddly satisfying".

If talking about a personal brand, posting GIFs daily is a really nice way to get awareness as an artist. Take the example of Beeple, a digital artist who has been publishing an image everyday for over 15 years. Now he is one of the most expensive digital artists in the world, who sold one of his works as an NFT for $100m. The work was the collection of his “everydays” in one image. That's a pretty solid result if you ask me.

>> Vlad Gindin is the co-founder of Lemons animation studio. He is also an NFT enthusiast engaged in a couple of projects, MUTANTTOADZ being one of them.

Tigran Manukyan: Good design comes with a lot of feedback

It depends on the taste, but I suggest asking for as much feedback on your work as possible. Good design comes with a lot of feedback.

Animation is like a light at the end of the tunnel, but sometimes there is no light and an infinite tunnel. You will continue making mistakes, but the most important thing is constantly moving and working on yourself.

>> Tigran Manukyan is a motion designer & animator born in Armenia, Yerevan. He’s been in the CG industry for more than 8 years and has won multiple awards for his work.

First of all: have fun! Creation is a complex and fascinating process, whether we talk about creating GIFs, animations or any type of visual media.

Despite the technical details, which are also important, always remember that the same result would never exist if you wouldn't invest your mind and soul in creating it. You are a creator, so express yourself and have fun doing it!

Some creators would say that a great animation requires great skills, and I think that's partially true. I think an okay animation is aesthetically pleasing and technically correct, but great animation has a personal touch that makes it unique. That personal element cannot be learned or taught; it is a form of visual expression that exists differently in every creator.

I think "inflexible" motion is one of them. You can see an object move, but its motion doesn't tell you anything about it, for example, moving from left to right. It is a mistake I sometimes still make.

When we are animating, it is important to consider some of the characteristics of the object: weight, the material it is made of, texture etc., all of these characteristics are also reflected in its movement.

The most successful GIFs are the ones that are frequently used on Instagram stories. Most brands are creating visually appealing GIFs to advertise some of their campaigns or products, especially for the younger generation.

When someone comes to me and asks for an animation, they want something similar to my work, and thus I get to work from my own style that I love.

So if you want to do animations that you love for a living, I suggest having a routine where you create something that you love every day/week/month and post that on social media. Eventually, that will create traction, and people will want your style for their brand.

It’s also important to understand why you’re doing an animation for someone. What is it going to be used for? It’s easy to lose yourself by rushing directly to the animation software and doing something cool rather than listening to the client.

I think when everyone starts out, they lack the feeling of timing. The animations they do don’t give you a feeling of recognition. They feel unrelatable and unrealistic. I’d rather see something that is animated correctly, where the animation feels relatable to the real world rather than a lot of shine and glow, and the animation is off.

>> Carl Johan Hasselrot is a motion designer who lives deep within the forest of Sweden. In his spare time, he loves to learn about a healthy lifestyle and create geometric art.

We hope that you found these tips helpful and that they inspire you to create more and better GIFs. And before sharing your GIF with the world, don’t forget to run it through the Animately app to optimize it.

Finally, if you’re a creative, please share your own advice for making stunning GIF animations!

How to Win With GIF Ads on Google Display Network

How to Win With GIF Ads on Google Display Network

How to Use Animated GIFs in Email Marketing for More Awareness, Trust and Conversions